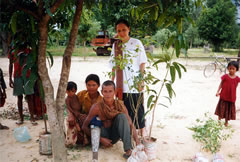 The disruption of civil strife has led to a situation where many villagers do not originate from the region they find themselves in and are not familiar with the soil and other conditions; they are consequently not aware of local agricultural and horticultural possibilities. Many young people, although villagers, have grown up on collective farms or in refugee camps and do not possess the basic knowledge and experience of farming that villagers normally absorb from infancy.

NKFC offers the services of an Agricultural Extension Worker who introduces the villagers to good practice such as manuring, an enhanced selection of seeds – especially vegetables – and works with them to improve yields.

In particular, NKFC has introduced ginger and jasmine as cash crops from which several farmers have benefited.

NKFC has given each family two fruit trees. Most of the trees have survived and are now supplementing and diversifying the diet and, in some cases, the income of the families.

Veterinary services were rarely and irregularly available in the villages before NKFC support began. NKFC selected individuals with aptitude from the villages and trained them in basic veterinary skills; a simple kit was also provided initially.

The Veterinary Animal Health Workers (VAHWs) provide vaccinations as well as treatments to sick animals, principally buffalos, pigs and chickens. They charge a small fee for these services, which provides income as well as some resource for the replenishment of their kits. The result has been a dramatic fall in mortality among the animal populations. This is not only important in itself, but also enhances the capital of the villagers, which is mainly kept in the form of their livestock.

An important contribution of the VAHWs has been to make the villagers aware of the potential threat of the “Bird Flu” that broke out in the region in 2003.

NKFC with the cooperation of the Ministry of Agriculture had trained a basic Vet (VLA) for everyone one of our 14 villages.

Upon completion they received an Official Certificate enabling them to practice. NKFC offered to each VLA a Starting Kit. 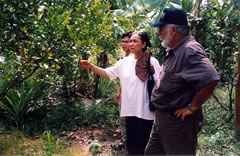 Traditionally, fish have been abundant in Cambodia and available even to poor people. Over-fishing, the granting of concessions to large exploiters, and increasing pollution have all reduced the access of these poor populations to free or cheap fish. Some farmers have built fish ponds, a practice that NKFC has encouraged and supported.

However, the process is relatively time – and money – consuming, soils are not always suitable thus allowing water to seep out, and there is even some theft of young fish. Consequently, the practice has not yet caught on. The benefits are potentially good and NKFC persists in encouraging such enterprises. A fish pond has been constructed at the NKFC Development Centre – built with a grant from the Belgium Government – to provide a demonstration to interested farmers. Even this has suffered from the theft of fingerlings, which proves that there is a real demand for fresh fish!

With support from NKFC, some villagers have been able to supplement their diet and incomes with produce in their own small plots. This is not sufficient to make them self-sufficient, but enhances their nutritional intake and instils a spirit of self-help. To abolish inadequate nutrition and poverty, nothing can substitute for employment creation and other efforts to enable people to earn a proper livelihood. This requires a supportive policy environment at Government level.